Hand made painted and decorated Easter Eggs have a long-time tradition in Bohemia and Moravia. The first reports come as early as from the 14th century. The various techniques had been used, for example dying by melted beeswax or embossing by a salty juice from sauerkraut or pickles. The eggs had been also decorated by wrapping them around with parts of plants and by a subsequent dipping into a color.

In some areas the eggs were being scratched with various patterns or they were being painted with pens dipped into a color. An interesting technique is also gluing the straw on the egg.

The most known method on the Slavic territory had become the batik printing of the eggs by wax. Originally the full eggs had been tie-dyed, today mostly the empty ones are being tie-dyed.

The Easter eggs dipped into a single color had been primarily made in Chodsko, in the Southern Bohemia, and in the Moravian Wallachia.

Not a very widespread but the very interesting method is laying the plastic wax relief of different colors onto the variously painted eggs. Besides the Eastern Bohemia, this technique had been also used in a small part of the Southern Moravia. 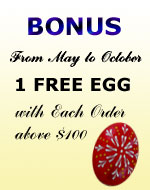 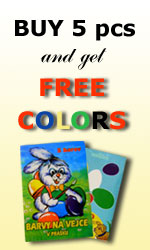